What is cross validation?

The problem with a simple train-test split

To intuitively understand why cross validation is important, we must first understand why a simple train-test split can be problematic. Consider a classifier that predicts whether a review is negative, neutral or positive. Suppose that our dataset comprises of 40% negative reviews, 40% neutral reviews and 20% positive reviews. If we perform a train-test split with 80% training set and 20% testing set, the following scenario might happen:

Here, the model will be trained using only negative and neutral reviews, and will be tested to see whether it can classify positive reviews correctly. Obviously, this split makes no sense because how can we expect a model to classify positive reviews when it has never seen any instances of them during training? Therefore, the testing accuracy in this case will be extremely low.

In fact, the opposite scenario can also happen. Suppose now that our dataset is comprised of 20% negative, 20% neutral and 60% positive reviews. With a simple 80-20 train-test split, we may end up with the following:

I admit that the two scenarios above are extreme, but who is to say such splits will never happen? In fact, there's a good chance that a more moderate version of these scenarios will happen in practise.

So how do we go about preventing these cases? The main cause is actually how the dataset was split - we randomly selected 80% of the data for training and the other 20% for testing. The problem with this is that the model's performance will be heavily influenced by this particular split, and so we cannot be certain that the model's performance will be similar if the split were to be different.

These situations can be prevented by cross validation, which uses different combinations of training and testing sets. With this approach, the model's performance can be measured using multiple splits instead of one particular split.

The $k$-fold cross validation formalises this testing procedure. The steps are as follows: 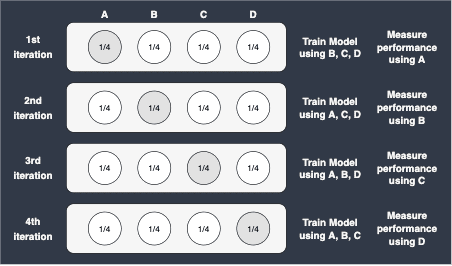 A typical value set for $k$ is either $5$ or $10$. If the size of the dataset is small, then a larger value of $k$ is often set because more data can be used for training the model at each iteration.

There exists a special case of the cross validation, called leave-one-out-cross-validation (LOOCV), in which the value of $k$ is set to $n$. For instance, suppose we have a dataset consisting of $100$ observations, and we perform LOOCV, that is, we set $k=100$. This means that at each iteration, $99$ observations will be used for training, while only $1$ observation will be used for testing. The total number of iterations in this case would be $100$.

LOOCV is often used when the size of the dataset is small since more observations can be used for training. Of course, the trade-off is that LOOCV is computationally expensive since the model must be trained a large number of times.

What we consider to be performance benchmarks would depend on our task at hand. Consider the following two cases:

Suppose we have a regression model (e.g. to predict a person's height). In this case, the mean squared error (MSE) is often used:

Suppose we have a classification model (e.g. to predict whether an e-mail is spam or not). In this case, we may want to use the misclassification error rate (MER):

In words, this indicator function does the following:

Basically, the summation part in the equation for the $\text{MER}$ gives us the total number of misclassifications the model has made, and then dividing by $n$ will therefore give us the proportion of misclassified observations.

As discussed in our article about confusion matrix, the performance metric to use largely depends on the scenario. For example, computing recall or precision instead may be more relevant.

Suppose we wanted to build a ridge regression model, which comes with one hyper-parameter - the penalty term ($\lambda$) - that requires tuning. We first come up with a list of values to use for the penalty terms - let's say:

We then train our regression model based on each of these penalty terms using cross validation. For each of these models, we would end up with the corresponding validation error like so:

Cross validation also allows us to compare any two models. For instance, suppose we have a classification problem, and we train two entirely different models – a neural network and a decision tree. Using cross validation, we can measure and compare the performance of both of these models. As a result, we can make an informed decision about which model is superior. This is in stark contrast to traditional statistical performance tests such as ANOVA, where we can only compare between nested models.

Suppose we wanted to build a logistic regression classifier that predicts whether students will fail (0) or pass (1) an exam based on their GPA and number of hours studied. In order to evaluate the performance of our classifier, we will use 5-fold cross validation.

To begin, import the required libraries:

We then import the dataset from GitHub:

We then split the DataFrame into features and the target:

We then build our logistic regression model and perform cross validation:

We can compute the mean classification accuracy by simply taking the average:

Here, we have evaluated the classification accuracy by setting scoring='accuracy'. In order to specify multiple evaluation metrics, use cross_validate(~) introduced below.

There are several ways to specify the multiple evaluation metrics.

The easiest way to specify the evaluation metrics using a list of strings:

Notice how the evaluation metrics are prefixed with test_.

We can also specify multiple evaluation metrics using a dictionary:

Notice how the key of our dictionary (e.g. 'prec') is attached to test_. The advantage of this approach is that you can specify the keys of the resulting scores.

To implement a custom scoring function, use Sklearn's make_scorer(~) function:

We have so far looked at the usage of cross_validate and cross_val_score. We now look at cross_val_predict(~) that returns the predicted label of each sample:

Here, we have 40 samples in the dataset, and therefore we have 40 predicted labels. Remember, every sample occurs exactly once in the testing set, and so we will make exactly one prediction per sample.