To understand this guide, you must be familiar with the concept of expected values. Please consult our guide if you are not.

Variance of a random variable

Intuitively, we can think of the variance as the average squared distance between a random variable and its mean, measuring the spread of the random variable's distribution.

Intuition behind the variance formula

For example, suppose a random variable $X$ has the following probability mass function: 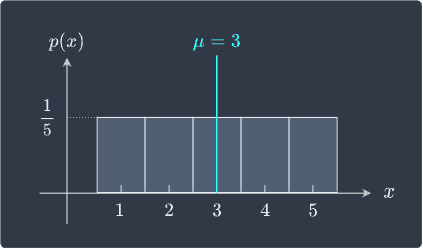 Recall from this sectionlink that the mean value $X$ for a symmetric probability distribution is at the center, which in this case is $\mathbb{E}(X)=\mu=3$.

The quantity $X-\mu$ measures the distance between a possible value of the random variable and the mean $\mu$. This is easy to calculate: 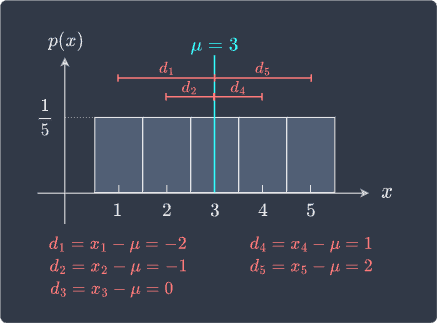 Notice how in the case when $X$ is smaller than the mean, the distance is negative. This is problematic for two reasons:

The second point implies that the expected value of $X-\mu$ is zero, which can also be shown using the linearity of expected values:

Clearly, this is not a good measure of spread because the probability histogram tells us that $x$ values are spread out, so the spread should not be equal to zero! Therefore, we should adjust the distance metric $X-\mu$ such that we don't encounter negative distances. One way of doing so is to take the square of $X-\mu$ like so: 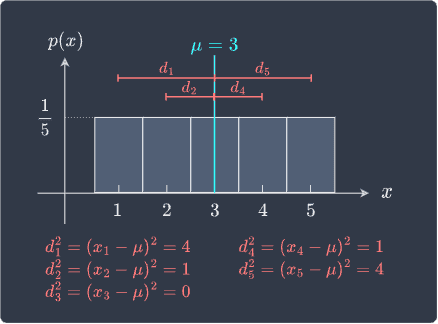 Why take the square instead of the absolute value?

For those wondering why we don't take the absolute value of $X-\mu$ instead, it turns out that defining the variance as $(X-\mu)^2$ instead of $\vert{X-\mu}\vert$ leads to extremely useful properties such as:

None of these properties hold if we were to define the variance using absolute value.

Taking the expected value of the squared distance

This allows us to compute the variance of $X$ like so:

Therefore, the measure of spread for $X$ is $2$. The higher this number, the more spread out $X$ is.

Suppose we have two random variables $X$ and $Y$ and their distributions:

We can see that $Y$ is more spread out compared to $X$. Instead of having to rely on visual plots, we can mathematically show that $Y$ has more spread than $X$ since $\mathbb{V}(Y)\gt\mathbb{V}(X)$.

Suppose we rolled an unfair 3-sided dice with faces $1$, $2$ and $3$. Let random variable $X$ denote the outcome of the roll. We assume that $X$ has the following probability mass function:

Compute the variance of $X$.

Solution. To compute the variance $\mathbb{V}(X)$ using its definition, we must first compute the mean of $X$, that is, $\mu$. By definitionlink of expected values, we have that:

Now, let's use the definition of variance:

Note that the definition of expected values is again used for the second equality.

Standard deviation of a random variable

The standard deviation of a random variable $X$ is defined as the square root of the variance of $X$, that is:

In the next section, we will explore the mathematical properties of the variance of random variables!