What is a sample estimator?

Because we are picking random fresh graduates, the salaries will also be random. Therefore, we can represent the salary as a random variable $X$. Our sample $\boldsymbol{X}$ consists of $n=100$ random salaries:

Intuition should tell you that the mean of this sample would be a good estimate of the mean salary of all fresh graduates:

We could also use $Y$ to estimate the population mean, although we will later prove that the sample mean $\bar{X}$ is a better estimator than $Y$. The point here is that estimators can be of any form - there is potentially an infinite number of estimators we can define for a population parameter. Of course, some estimators possess properties that make them more desirable than others. 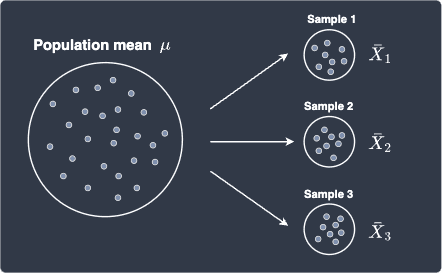 Sampling distribution of an estimator

Suppose we ask 100 random fresh graduates for their salaries to form a single sample. Let's say the mean of this sample is $\$1200$. Next, we ask another 100 random fresh graduates to obtain a second sample. This time, let's say the sample mean is $\$1100$. Suppose we repeat this sampling process 1000 times, which means we would end up with 1000 samples (each of size 100) and of course, 1000 sample means. Let's illustrate the sampling process: 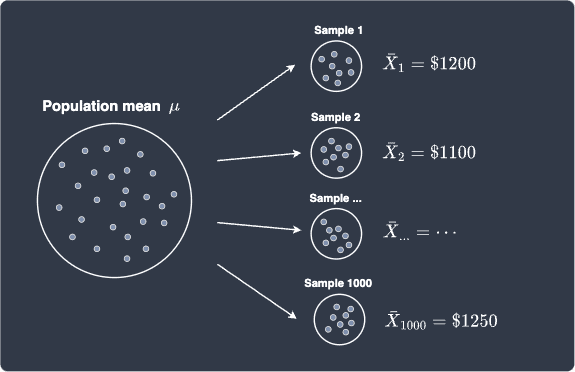 Let's plot the frequency histogram of our 1000 sample means: 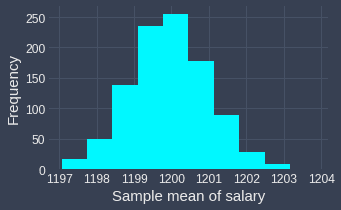 As we shall explore later, the central limit theorem guarantees that regardless of what the true distribution is for our original random variable $X$, the sampling distribution of the sample mean will approximately follow a normal distribution. Therefore, it's no coincidence that we ended up with a normal-looking distribution above!

In most cases, we are interested in estimating population parameters such as the population mean, variance, covariance and correlation. We will cover the sample estimators for each of these parameters:

We will also discuss basic statistical properties of sample estimators such as bias and mean square error.