What is a boxplot diagram?

A boxplot diagram, or box-whisker diagram, is a popular way to visualize the spread of our dataset using quartiles. Recall that quartiles are 3 values that split an ordered sequence of values into four parts of equal size. For instance, the quartiles for the following values are:

Note that boxplot diagrams are typically laid out vertically instead of horizontally as in the case here.

Consider the following set of values:

Here, the red vertical lines from left to right represent the 1st, 2nd and 3rd quartiles: 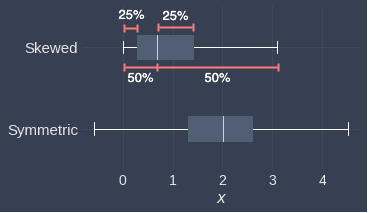 Let's examine the difference between the shapes of these boxplot diagrams:

Consider the following set of values: 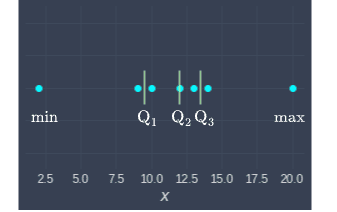 Here, the minimum and maximum are outliers because they are far away from the bulk of the values. To identify these outliers, we can come up with a lower and upper threshold in which values smaller than the lower threshold and values larger than the upper threshold will be considered outliers. One way of computing these thresholds is by using quartiles and interquartile range:

Using our formula \eqref{eq:zV0JeVWuNA7MLyXxPaK}, let's compute the lower $L$ and upper $U$ thresholds:

This means that any value lower than $L=3.5$ or larger than $U=19.5$ will be considered as an outlier. Let's draw in these thresholds in our diagram: 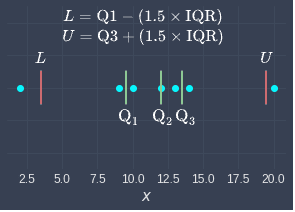 Here, we can see that the minimum and maximum are to the left and right of $L$ and $U$ respectively, which means that they are outliers! 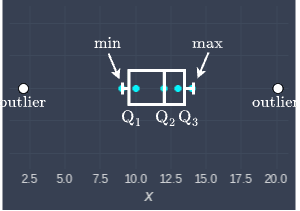 We have said that the formula to compute outlier thresholds is as follows:

We typically use the factor $1.5$, but this number is arbitrary - we can select any number we wish. For instance, if we want to be more strict with what we identify as outliers, then we should select a larger factor such as $2$.

Here, we have included the raw values. We can see that even though the boxplot diagrams are identical, the number of values used to construct them are different. If you imagine the set of values as a sample from some population (e.g. size of family), then the top boxplot diagram is more trustworthy than the one below because the sample size is larger.

On top of this, overlaying values allow us to see the distribution of the points within each quartile. For instance, for the first boxplot diagram, we can see that the values are concentrated on the left, which is an insight that we gain only by overlaying the values!

Drawing boxplot diagrams is a piece of cake using matplotlib, which is Python's main graphing library. Let's use the same set of values as before:

This produces the following boxplot diagram: 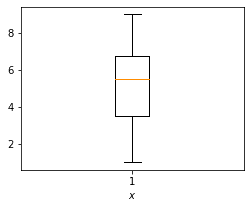 This is basically the same boxplot diagram we had before, except that the orientation is vertical instead of horizontal.

By default, outliers as computed by \eqref{eq:zV0JeVWuNA7MLyXxPaK} will be indicated by circles: 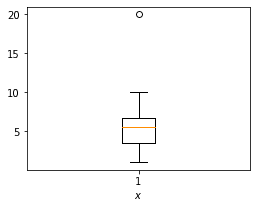 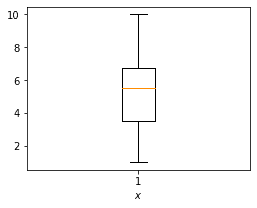 By default, the orientation of the boxplot diagram is vertical. We can change this to horizontal like so: 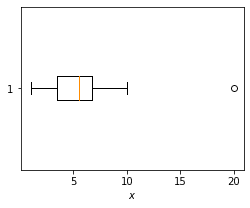 To draw multiple boxplot diagrams in a single plot: 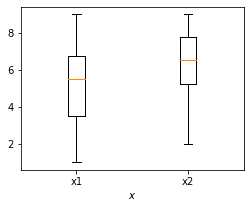 Boxplot diagrams are one of the most popular techniques for explanatory data analysis. We can visualize the quartiles to roughly understand how values are distributed. The other useful application of boxplot diagrams is for outlier detection, which is also based on the quartiles. There are other more complicated techniques to identify outliers, but I recommend that you start off with boxplot's technique because of its simplicity and robustness.